The family who lives in this 1952 James Bronkema home are no strangers to attention. Looking like an example of of the Case Study House program, their home would not seem out of place in a history book amongst other famous modern houses of the era. Its steel construction, large expanses of glass, and lush green roof have naturally sparked the curiosity of many passers-by. Strangers sometimes even approach the front door, only to be greeted first by the family’s two Chihuahuas (Ted and Ignacio, or “Nacho,”) before meeting the four person family that calls this classic home.

Sundays seem to be peak traffic time for the “cul-de-stalkers” as the family calls them, “when everybody gets out of church. They come with cameras. They shoot video. Some people will knock on our bright green door.” “The door color was our idea,” the son smugly adds, referring to his younger teenage sister and himself.

The family’s house is one of seven modern homes on their dead-end street, all built in the 1950’s by James Bronkema. At the time their home was built, a young James (Jim) Bronkema was making a career for himself constructing notable modern homes around Grand Rapids and selling real estate. Shortly before their home was built, Bronkema purchased the lot on which he would later develop this modernist enclave the family calls their neighborhood. Their home was the first to be built, and was commissioned by Frederic Fay, who made his living in the furniture industry. His son, Brad recounts how the home came to be. “My dad was very interested in modern architecture, and so when he heard about Jim Bronkema, he was really excited to do this house. He worked closely with Jim on the design of the house, as he himself was not unfamiliar with a drafting board. Construction began in 1952, and in 1953, we moved in. One of the touches my dad left was a drafting table built into the dining room area. Behind some folding doors, it would emerge, and there he would often do his work in the evenings.” Brad would continue to live in the home until he was around eight years old.

Constructed primarily out of glass, steel and concrete, the home was assembled from many ready-made parts, and was a radical design for its time. (It wasn’t for instance until a decade later that renowned mid-century modern architect, Donald Wexler wowed the world with his now famous prefab steel homes built for Alexander Construction Company in Palm Springs, CA.) Inside of the home, slender steel support columns rise out of the concrete slab floor, carrying the weight of the corrugated-steel roof through a series of I-beams that run in one of two directions depending on which wing of the L-shaped house is being viewed. Because the steel framing supports the weight of the roof, there is little need for load-bearing walls, allowing for large expanses of floor-to-ceiling glass where the visual barrier between dwelling and nature dissolves. The blackened steel I-beams penetrate the largely transparent exterior walls, and carry the roofline from indoors to outdoors, adding a sheltering sensation to an otherwise very open floor plan. Originally, some of the interior walls did not reach the ceiling, as is seen in the kitchen, enhancing the sense of openness (though some walls have since been fully enclosed for privacy.)

“My parents were very social,” Brad recounts from his childhood. We hosted a lot of bridge clubs, potlucks, and gatherings at that house. A lot of our guests were enthralled by our home to say the least. They thought it was truly unique for its time. In fact, it’s still unique today, as it’s the only Bronkema house of its kind. I do remember people coming through and being just in awe. My dad loved giving little mini-tours. It had some modern touches, like central A/C, which wasn’t very common in Grand Rapids at the time.”

Eventually, the home would change hands many times before the current homeowners bought it. “My mom didn’t like the house,” Brad admits. “She was not into modern architecture at all, and we eventually moved to Forest Hills where my dad collaborated with builder John Vandenberg on more contemporary tri-level house. She was not at all thrilled with the house for a lot of reasons. There were no kids in the neighborhood for my brother and me to play with for instance, and on top of that, the house would not heat! At some point, a second furnace was added to the house off the dining room to keep the dining/living/kitchen area warm.”

The challenge of climate control in a mostly glass, concrete, and steel home in Michigan was one of the many challenges the current owners had to consider when they purchased the home in 2006. The flat roofline turned out to be a perfect match for the living green roof they installed, which insulates the home in both hot and cold weather. The home’s floors had embedded ductwork made of cardboard laminated with tar that had rotted and become moldy. Their daughter recalls, “when we first looked at this house, I said ‘this place smells disgusting. I don’t want to live here!’” “So the kids learned a lot about general contracting early on,” the father jokes. “We ripped it to the studs. We had a bobcat in here at one point to rip out the old concrete slab and had new concrete floor with radiant heat poured.” The family moved into the home in December 2007 after their intensive renovation. In total, it took about 8 months for remodel. “And in the end, the kids still did well in school through the intensive ordeal, and we’re still married,” jokes the mother. 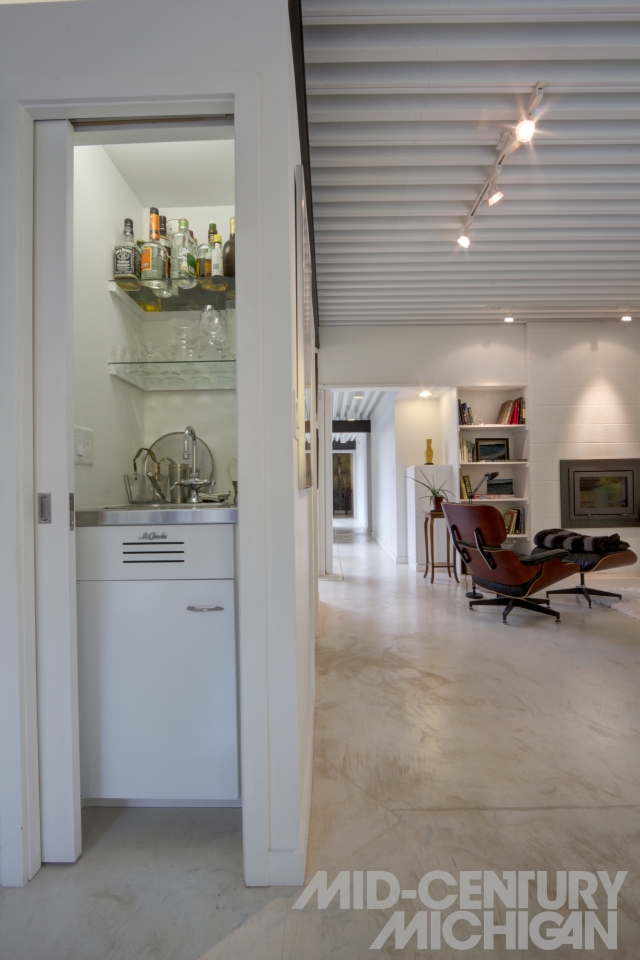 “We first saw the house during a holiday party after returning to Grand Rapids after living in a large mid-century modern home in Texas, and thought it was really cool,” the family recalls. “We thought, man, this is the best house, but we’ll never live here because we’ve got two kids, and, it just seems like it’s not gonna happen. By that point, the house had changed a few owners and, was chock full of antiques and trinkets, there was wallpaper everywhere, the kitchen had a drop ceiling added, and some of internal steel I-beams supporting the roof had been clad in plywood. After traveling to Germany and seeing how some people live there, decided we had to downsize!” they add. “When we came back, the previous owner was preparing to sell it, so we bought it off-market directly from him.” 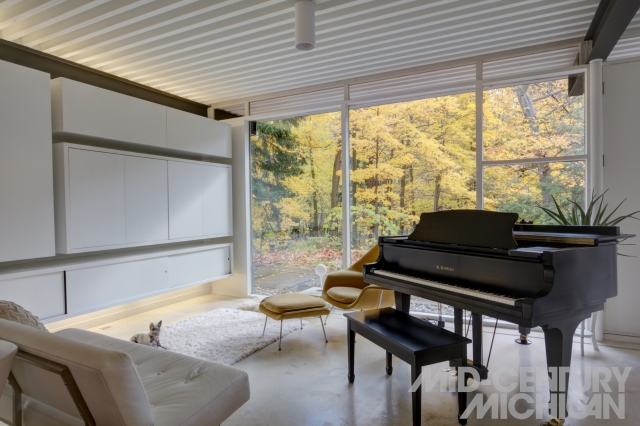 Because of the house’s high level of transparency, curating the outdoor spaces became an area of focus for the family. “The yard is entirely Michigan native plants, meant to be low-maintenance. We pulled out any non-native plants early on,” they mention. When it precipitates, the roof drains into a main cistern used to water the backyard. Behind the house the wooded lot features a sunken patio, a serene reflecting pool, and outdoor kitchen, covered by the cantilevered roof. The front and side yards are overtaken in the spring and summertime with wild strawberries which serve as not only ground covering, but a tasty snack for both the family, and the dogs. Closer to the road, the family keeps a prolific vegetable garden, which provides a variety of fresh ingredients for their creative vegan meals. In a sheltered area behind the master bedroom, a sculptural red slate fountain gently bubbles, creating a serene soundtrack for when night falls. Flowing like a black river outward from a glass wall in the master bedroom, a collection of Mexican beach pebbles aligned in a sinuous form help direct drainage away from the home. No detail was spared curating the exterior. Even the power lines running to the home were buried as to not detract from the atmosphere.

When it comes to the interior, the family reached out to their late friend, Nancy Phillips for advice. (Nancy met her husband, graphic design legend Steve Frykholm while working at Herman Miller in spatial planning.) “Nancy was instrumental with giving feedback on our house,” they state. “Many times, we asked ourselves, ‘what would Nancy do?’ We remember her saying ‘It is better to have a dirty light-colored floor than a clean dark one.” Noticeably, the concrete floors have a white finish. One of the family’s proud contributions to the interior is the design of the floating cabinetry in the main living area, which houses the entertainment center. “The form was inspired by Donald Judd, and helps us hide clutter.” Mid-century modern furniture mingles alongside contemporary pieces throughout the living spaces. The centerpiece of the living room is a K. Kawai grand piano, which the family’s daughter plays.

The bedrooms feature custom built-ins for desks and shelving, and elevated bedding with cabinetry filled with storage below. The only major modification to the footprint of the house is a very small addition to the master bedroom, just large enough to fit a bed. Because the same corrugated steel ceiling is no longer readily available, the addition is the only place a flat ceiling is seen.

In the kitchen, original white enameled steel St. Charles cabinets look as new and sleek as they day they did when they were installed. “The wet bar found around the corner in the dining area behind a pocket door was part of the original kitchen,” they mention. “It was so cool that we wanted to have it somewhere, but not have it be the centerpiece.” Stainless steel appliances and a wraparound stainless countertop add a high level of function to the L-shaped gourmet kitchen.

Throughout the home artwork is featured. In the master bedroom hangs a hand-numbered signed lithograph by Alexander Calder, depicting Grand Rapids’ own La Grand Vitesse. The piece was a gift from grandparents of the family, and the primary blazing “Calder red” featured in the print inspired the color chosen for the curtains that cordon off the closet adjacent.

Needless to say, this family’s home is an anomaly among the majority of modern homes found in Michigan with its steel construction and pavilion-like form. Looking more California contemporary than Michigan modern, it is no wonder that its sleek looks still attract observers over 60 years later. And if its magnetism still pulls in the passer-by decades on, how was its public reception when it was still a young community? Brad, who grew up in the house shares, “Living here as a child absolutely had an impact on me. I’ve always had a great appreciation for modern architecture, especially Jim’s houses, and that love started here.”