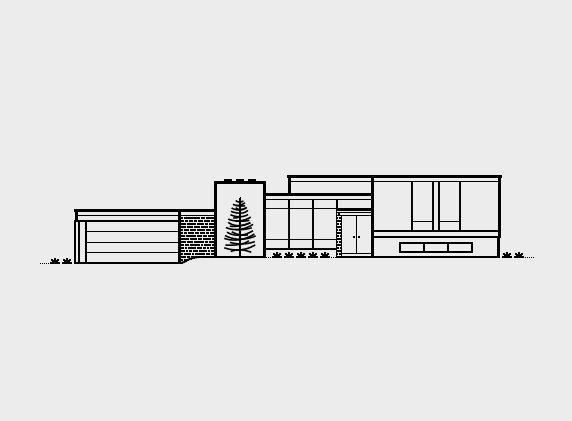 Flash back to April 21, 1967, when forty-five tornados ripped through the midwest, leaving a path of destruction from Missouri to Michigan. Grand Rapids witnessed at least two of these powerful vortexes, one one of which left a newly built modern home by Wayne McClure in shambles. When the lot and remaining structure consequently went up for sale, the neighbors across the street saw a potential to build a new home for their evolving needs, and purchased the wreckage. Using the foundational footprint of the original home, they commissioned architect Chuck Carter to rebuild something new out the remains. Looking at it today, is hard to imagine that in a neighborhood where mid-century modern houses stand out against their traditional counterparts, that one of the handsomest examples amongst the bunch was once a dilapidated structure.

Today, this Chuck Carter house catches the eye with an ultra-modern form that somehow feels right for its neighborhood. It is a series of interlocking volumes, right angles, and mix of materials such as stacked stone, large expanses of glass, and vertical siding that give this home a decidedly retro-futuristic feel. As attractive as it appears on the outside, it is every bit as stylish on the inside, lovingly curated by modernists, Tom and Vickie, who have called it home since 1986. 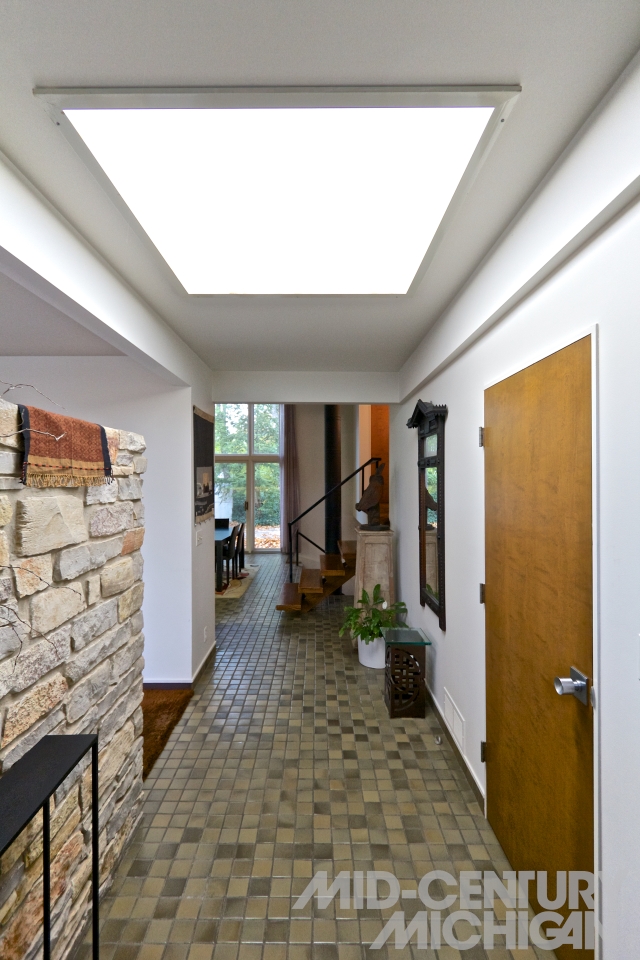 The home sits far back from the street, greeting visitors with beautiful landscaping trailing up a gentle slope that leads to the covered entryway. Here, a stacked stone wall leads to the front door, piercing the exterior and continuing inside of the house, where it divides the entry hall from the living room on the left. It does not, however, reach the ceiling, leaving an open, airy space between the two rooms. From this entry hall, it becomes apparent that the home is a cascade of three levels, allowing the occupants to look both down into the lower level, and into the open hallway upstairs at once. This junction occurs in the dining room of the house where the open space between the three levels is punctuated by the metal chimney of a freestanding matte black fireplace found downstairs. Two floating wooden staircases bridge the different heights, leading either up, or down, and are flanked by a thin metal railing — a 1960’s design element that Vickie asserts would never pass today’s safety codes. It is because of these three offset levels that the home takes on such a distinct shape from the exterior, with its dynamic volumes and varied rooflines.

Judging by the choice of furniture and objects placed throughout the house, it is clear that Tom and Vickie have a serious eye for modernism and art. “You can tell by looking around that modernism has been in our blood since before we were married,” Vickie says. “I was in home economics at MSU, and some of the classes allowed us to visit Herman Miller in Zeeland. You can recognize the pieces,” she states, as she begins to point out the furniture by design icons George Nelson, Ray and Charles Eames, Isamu Noguchi, and more. “The only reason there isn’t a Herman Miller couch in our living room anymore is because now that we’re older and our friends are getting older, we need something we can get out of more easily,” she laughs. “The George Nelson Sling sofa that was once there is now downstairs” adds Tom. All throughout the house, items from Vickie’s extensive folk art collection can be found. Over the past several decades, their travels have allowed her to collect pieces from around the globe. Most of the collection lines the two George Nelson Comprehensive Storage System shelving both upstairs and in the lower level. Amongst her finds are many pieces by lesser-known folk artists, as well as original pieces by more notable outsider artists such as Howard Finster, who first came to widespread notice with his album artwork for R.E.M. and The Talking Heads. In two of the bedrooms hang an original signed print by Christo and Jeanne-Claude, and a hand-numbered Matisse lithograph.

Prior to living here, Tom and Vickie owned a modern home in the Albert Builders development less than a mile away. As Tom recalls “We really enjoyed that house. Something I liked about it was that all the windows were in the corners. We lived there about fifteen years.” At that time, Vickie was in real estate. She explains, “We were friends with the prior owners of this home. They had lived directly across the street from here before the tornado, but were outgrowing their home, as they had three boys and the kids’ grandmother to look after. But several years later when it was time for them to sell, they asked me to list this house for them. We liked contemporary design and had been here to parties a lot, so at that point, I went home to Tom and asked, ‘What would you think about buying the house for ourselves?’ Our own boys were grown, so the timing seemed right.” “We just loved this house all along,” says Tom with a chuckle, beaming as he looks at his surroundings.

Because the house was designed for a couple with three boys and a grandmother, a sense of pragmatism and function are noticeable in its layout. For example, the basement level is complete with its own living room, kitchenette, bathroom and sunken patio area with a private entrance, which would have served as an apartment for the grandmother. Today, it finds use as a complete guest suite. A card table in the basement folds into the built-in lighted shelving. Four skylights keep the home illuminated in a natural glow, and even allow for moonlight at night. One of the skylights forms a light well that extends from the top level the downstairs bathroom, penetrating into the basement through a pane of frosted glass. All bedroom closets have cabinetry and drawers built in. “Chuck Carter did a lot of great things. I’ll tell you…architects have great ideas,” Vickie remarks. 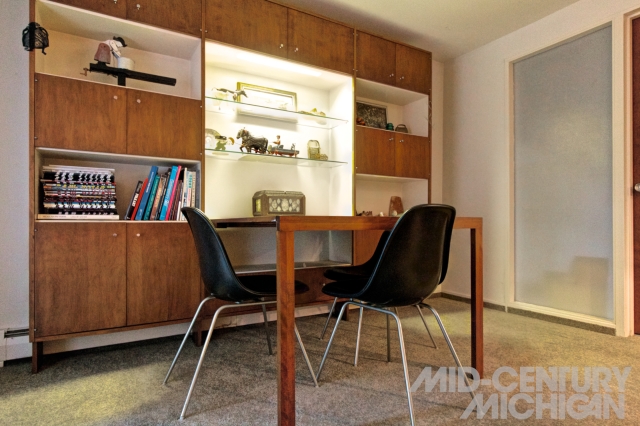 One of those great ideas was to increase the footprint of the house by adding foundation to the rear. This allowed for a new volume to be created, which serves as a storage area below, with a master bedroom above it. In the storage room lies a relic from the original home that was destroyed: a set of metal Geneva kitchen cabinets were salvaged from the wreckage and found their second life downstairs. Upstairs in the master bedroom, occupants can look out a wall of enormous glass sliders, and exit onto a railing-free balcony that overlooks a courtyard a short distance below. The other three bedrooms upstairs each have their own brightly colored doors, which share the same palette as the Herman Miller Company Picnic posters designed by Steve Frykholm, that hang nearby. These extra rooms have found adaptive reuse as a home office, and guest bedrooms. 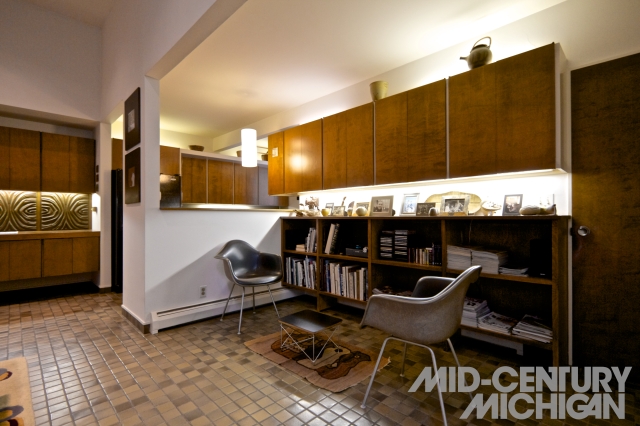 Many things about Tom and Vickie’s house seem frozen in 1967, yet impeccably preserved, and completely livable by today’s standards. “We’ve built in some bookcases, but other than that, it’s pretty much original,” says Tom. The only major change that Tom and Vickie have introduced was an update to the kitchen. As it previously stood, retro features like wall ovens and a built-in countertop blender were once part of its “modern” amenities. Their remodel was sympathetic, however, where they matched cabinetry to what already existed, and chose simple forms and elegant materials.

“All of our neighbors around here have a strong sense of community and many of them are interested in modern architecture,” Tom concludes. Despite the lack of historic preservation ordinances in their neighborhood, it is because of owners like Tom and Vickie that gems like their own home color the neighborhood with their exquisite, unadulterated forms. But their house is extra special amongst the rest, carrying with it a story of creation and transformation, where out of rubble, a beautiful work of balance and form arose.

A special thanks to <a href=”https://www.behance.net/gallery/19232419/Midcentury-Modern-Homes-Collection”>Michael Nÿkamp of MKN Design</a> for the Illustration, and to Pamela Vander Ploeg of <a href=”http://westmichiganmodern.com”>West Michigan Modern</a> for the black and white photo of the Wayne McClure home that once stood in place.

The Wayne McClure home as it stood before being razed by a tornado. Photo courtesy of West Michigan Modern from the Betty Gibout Real Estate Collection, Grand Rapids Public Library.